There are scant images of “Celtic” women that survive that are made by their own culture.  Much of what we get are images from other cultures (Greek and Roman) which may not be the most accurate source of information.  Roman and Greek writers and artists are known for taking liberties with their information after all.  The best known images of Celtic women follow a standard of symbolic “disgrace” identifies such as loose hair, clothing falling off the body that create exposure, running away, in the throws of torment…you get the idea.  Many of the most famous images date from the 2nd-4th century AD and seem to typically depict Dacian “barbarians”.

Whenever I find an image, I get giddy, especially images of women.

The image for this post is a statue from Entremont which was a briefly occupied oppidum near Aix-en-Provence in southern France.   The oppidum was considered Ligurian territory and was occupied sometime around 180 and 170 BC but abandoned by 123 BC due to seizure by Rome.  The Romans abandoned the oppida within a few decades.

I would feel comfortable in saying that this is an item that stylistically doesn’t read “Roman” to me.  If not for a few elements of the clothing I might have assumed it was very early Gallo-Roman as it has that transitional flavor, but oh boy, that checked pattern is a hell of a give away.  I would love to get better images of this item to get a really good look at it.  No date is listed but due to the very short occupation of the native people at this location, I feel comfortable listing this in the 2nd century.  The style emulates wooden and stone humanoid figures from Gournay-sur-Aronde (Somme)’s “war sanctuary” with it’s large collection of surviving votives. 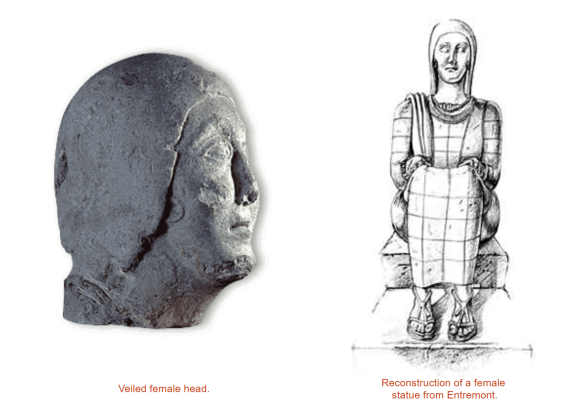 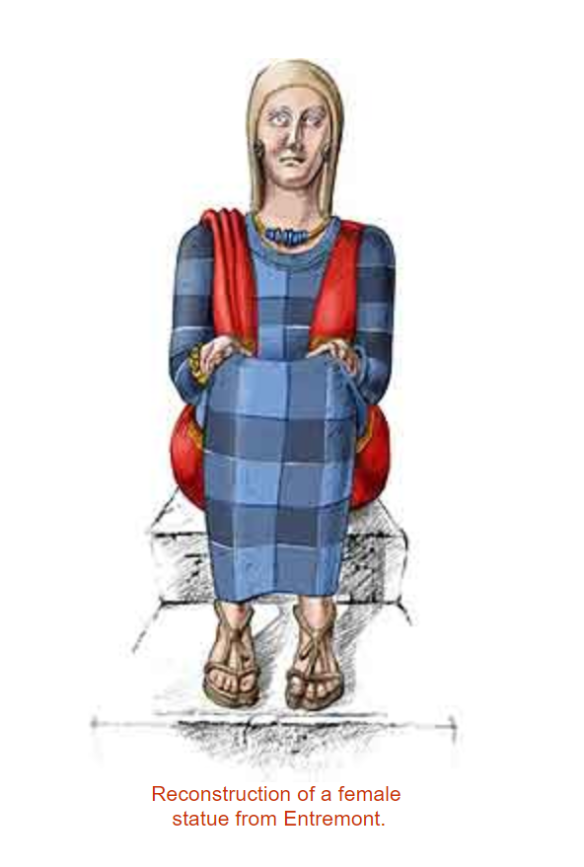 Colored version for better detail of the break down of layers.

There are a variety of general assumptions about what a “Celtic” person would look like in the re-enactment word.  Sometimes we come across nuggets that really challenge how people may have lived, what they wore, and what they looked like.  This is one of those items.

The description for this item from its sourced site reads:

“At Entremont, as well as at the contemporary settlements of Mont-Garou and Courtine in the Var region, several portraits and body elements (with draped and decorated clothing), including feet wearing sandals, reveal the presence of females among the characters accompanying the honored heros. Through analysis of statue fragments we can reconstruct seated females wearing long robes and coats. Their heads are covered with long veils that descend down their backs. They are attached to stone bases that were originally low seats. The representations of robes and coats suggest high quality tissues that were decorated with a checkered motif. This last aspect is also shown by the sculptures with incisions emphasizing the motifs and by painted colors, which have unfortunately almost completely disappeared. “

When I look at this image my eye dart to the shoes.  “Bog shoes” are well loved and a standard among Celtic re-enactors but this is a clear, period indicator that there was a sandal variation available.  These sandals would not have screamed Celtic to me.  At the same time, I have been unable to find more images of the statue itself other than the head and reconstructions.  How much of this outfit is conjecture and how much is truth?  I’ve reached out to the museum it is in for a response, so I will likely update if/when I have a response.

In the colored image the red “wrap” reminds me of some of the working theories around women’s costume for this area by Helga Rösel-Mautendorfer in her paper “Möglichkeiten der Rekonstruktion eisenzeitlicher Frauenkleidung mit zwei und drei Fibeln”.  Her paper is amazing and I’ll likely dedicate a post to it someday.  I model some of my own garb from her work.