I’ve been up to plenty of reading and sewing and crafting but precious little logging of my activities.  I went to my first Pennsic recently and man was it both a great time and a massive pain in my ass.  I do not summer.  Just about every image of me I am a puffy and swollen mess (sun allergy, yay!) but I did manage a single image before the Bacchanal Party while visiting Rome and enjoying some “Greek Fire” mead that was lovely.

I’ll be teaching my first class on Epona for Battle on the Bay in the coming weeks.  I made a nice connection with the Ring Tribe which is filled with Iron Age Celtic people from all over that I am pretty excited about.

I had been meaning to start posting little blurbs on artifact I particularly like and a nice way to remind me to “Learn how to make this thing and stop going crazy looking for specific items in your forest of pdfs.”

When it comes to the food of the celts were mostly have “an idea” as recipes don’t exist.  We rely on latin and greek accounts of food as well as the occasional  break down of some surviving pieces of food.

However, Gaul is a large place with many overlapping cultures.  Today I want to talk about Passum.  Passum, I believe, would be a reasonable wine that some of the populations would have come in contact with in Roman Gaul.  Seeing as the celtic populations loved their undiluted wine, I think that more eastern celts would have had contact with this item.

Passum is a sweet raisin wine thought to originate in Carthage but made it’s way into the Roman Empire.  It was not only drunk, but reduced and used as a sweet sauce in recipes.  Surviving documentation for it come from a Punic farming manual by Mago(unknown date).  Mago’s Latin translation is by Decimus Junius Silanus (2nd century BCE) and referenced by Columella in De Agricultura 12.39.1 (1st century CE).  This fits within my period of interest.

A modern variation of the food is called “passito” and can be found in specialty wine shops.

Additionally, this is considered a “girly drink”.  Polybius, in Histories, Fragments, 4.6.2, writes that “Among the Romans women are forbidden to drink wine; and they drink what is called passum, which is made from raisins, and tastes like the sweet wine of Aegosthena or Crete.”  Don’t worry, gentlemen, there is no shame in passing the time with some passum.

Below is the quick and dirty method of making this wine.  If you brew your own wine, then that’s a whole other step that’s up to you.  This recipe is quicker and take about 4 days.

1 Bottle White Wine such as a Riesling or Moscato

White/Yellow Raisins to taste (I used about 1.5 Cups)

Gather ingredients and find yourself a pitcher of some kind you will be able to shake or stir.

Combine wine and raisins.  Give it a good shake or stir.  Place aside or in the fridge for 4 days.  You can leave it for longer if you want a very strong raisin flavor.  Mix the concoction every day.

After several days you will have plumper raisins and a more golden wine. 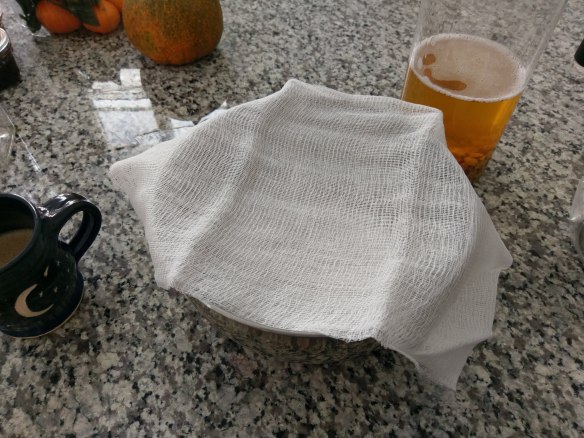 It is time to strain the contents of the passum.  I used a mixing bowl and cheese cloth for the first straining.  FYI: you can keep the wine soaked raisins and eat them or add them to a recipe.  I cannot say how long they keep since my husband ate them all immediately. Tasty!

Since I wanted a much clearer looking batch of wine, I added some cheesecloth to my funnel for one more straining as I bottled the brew.  Coffee optional, but highly motivating for achieving things.

Passum bottled and ready to go.

This was debuted at Lochmere’s Holiday Bardic this last weekend.  It was very sweet and easy to drink.  It went well with many of the find dishes people brought.  This was simple and tasty, so I think I will make is a staple that I will bring to BYOB events.  Feel free to track me down if you want a taste.